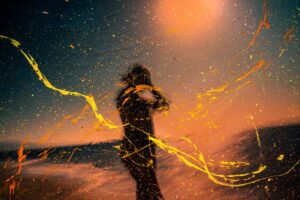 While living at Sweethome, I had several practitioners present their work in classes, workshops, and events. One Cree native desired to have a sweat lodge as part of our fall gathering. I had no idea there were so many dos and don’ts in setting up the space! I was reprimanded for not wearing the right clothing and for crossing the imaginary line that no one mentioned was there. I was told that no photos could be taken at any point during the setup or the ceremony.

Once inside the tent we had constructed, I had a lot of thoughts to examine. Why was I feeling like I wanted to run out of the tent? It was not the heat—I had stayed the full round in sweat lodges before. I felt trapped, just as I had in the Christian church where I had to conform to the rules set by the “leadership.” So, this was a trigger for me.

After the first round was complete, I went to the woods to check my personal 18-inch energy field and inquire of my guides if I should go back in for another round. I felt light-hearted in the woods but when I thought about going back into that tent I felt uncomfortable energy in my body. I did not participate in the second round and continued to seek guidance on what I was experiencing.

I am not sure how many rounds were conducted. I came back hours later and attended the last round because I felt like I needed to support the facilitator and be a good example to the others who were enjoying the ceremony and were benefitting from sweating. My spirit, body, and personality were shouting in unison that this ceremony was not for me. I had to interrupt and be let out of the tent.

The next day, the leaders took the tobacco prayer bags used in the ceremony and tied them to the trees in the woods in my backyard. After they left, I videoed the prayer ties in a walkabout in the forest. I was singing and speaking light language and giving gratitude for the fall retreat and everyone who had attended. I sent the video in a private email only to those who had participated in the sweat lodge, thanking them for coming. I was again reprimanded when the leader saw the video. My heart sank. I had not recognized the value of honoring the traditions of the Cree people. What felt like restrictive rules to me may be survival strategies for Native peoples whose cultures were nearly destroyed by White settlers. There is a lot of valid upset in Indigenous communities around that. I understand why they desire to preserve their sacred traditions from dilution or misuse by outsiders like me.

I had no desire to ever go to another sweat lodge. I felt like I had resolved the feelings I had around this event. As you may well know, the Universe typically sends us opportunities to check our progress in overcoming residual energy of such experiences. My friend Daphne invited me to a sweat lodge a few weeks ago. I did not want to go but I felt there was something in my subconscious I needed to work with. I was going through a difficult ego-realignment. Maybe I could sweat out the contraction/resistance I was feeling and move to expansion. The day before the sweat lodge, Daphne decided not to go. I could have gone without her but I didn’t feel it was necessary. The contraction I had been feeling was no longer an issue.

The fact that I was willing to go back into a situation that could trigger me was enough to bring peace this time. As many of you know, my guidance urged me to go back to church last year. I spent ten weeks in an alternate timeline reality to bridge the gaps in my experience with Christianity and my metaphysical views. I knew I would likely be triggered and experience wounding. But, I allowed myself to get close to some women and share my heart, which may have felt like I was pushing their buttons. Amazingly, there was very little emotional attachment to them pushing mine. I felt only love in those deep intimate conversations. I had nothing to prove. I didn’t need to be right or make anyone else “wrong”. I was there to do what Spirit asked–BE LOVE and show compassion. I may never know all that happened in the etheric realms through that experience. I knew my mission had been accomplished. I felt complete and whole.

Everyone has their own methods and opinions—mine are no better or less correct than anyone else’s. In all circumstances, find what works for you. It is fine for others to have an experience different from yours. Allow your beliefs and practices to change as you learn, grow, and evolve.

The above entry was excerpted from Yvonne Perry’s book, Celestial Shamanism ~ Using Interstellar Light Codes to Find Your Authentic Path in a Shifting Human Paradigm.