Part of the work that walk-ins are here to do is to restore communication between humans and galactic beings. We do this as we begin to connect with our divine source within our Sacred Heart, maintain and keep our personal energy field clear of emotional or mental debris that disrupts the cellular communication of the body. Due to its telepathic codes and frequencies, light language is an integral part of this communication network.

There is a level of supernatural speaking known as a light language, spirit language, or star language that carries frequencies of light that contain cosmic or galactic information. A lot of walk-ins (and people who are not even familiar with the walk-in concept) are spontaneously receiving this language. It may sound like gibberish with a sing-song lilt, much like Mandarin or oriental Asian, but some languages feel pre-Atlantian and pre-Lemurian. They are galactic dialects.

If you were raised in church, you may have come across scripture that talks about the day of the Pentecost in which tongues of fire fell upon a culturally diverse gathering of people, who then began speaking languages that they had not learned. This incident allowed a linguistically diverse group of people to rise above their language barrier and communicate without translators. (Later in this book, you will read about a modern-day walk-in’s experience in supernaturally receiving the ability to speak the Russian language.)

Native Americans have known about star languages for longer than there has been a Pentecostal denomination. There are similarities between the experience of being baptized in the Holy Spirit, evidenced by the speaking in tongues, and the activation of these light languages.

In the early 1990s, I became interested in the gifts of the Spirit mentioned in the Bible. I prayed every day to be filled with the Holy Spirit and to receive all nine gifts mentioned in chapter 12 of I Corinthians. Soon, I started sensing and even sometimes seeing spirits. I had faith to believe in things that others thought impossible, and witnessed the manifestation of miracles. Gifts of healing soon appeared when I laid hands on people; I began to prophesy, have dreams and visions, and “know” things about people that had not been revealed to me.

In 1993, my prayer partner came to my house. She mentioned that she had received the gift of speaking in tongues that allows one to speak from the heart without the logical mind knowing what is being spoken. Since I was so hungry to experience more of the Holy Spirit, she thought it would be easy for me to receive what she called a “prayer language.” In simple faith, I let the energy pour forth that I had been bubbling up inside me. The words I spoke sounded like a real language and not just incoherent babbling. I trusted that it was indeed the gift of tongues, and continued to use it in my prayer times throughout the 1990s. Soon, I had a sense of what I was praying for when I used this language. People seem to be receiving these gifts today without all the wrestling and time my natal soul spent seeking this experience!

I worked so hard to bring forth these gifts, and then gave them all up after my walk-in when everything in my life shifted dramatically. After I left organized religion in the early 2000s and stopped having a daily prayer time, I practically forgot about these gifts. You snooze, you lose; or so I thought. When I was in Sedona in 2012, I met a Native American grandmother named Sakina Blue Star, who invited me to participate in her medicine wheel ceremony. She opened the circle by calling on the four directions. As soon as I heard her speak a greeting in her star language, my solar plexus and throat started contracting and I began groaning as I held back and tried not to interrupt Sakina. However, she immediately recognized what was occurring and asked me to share the message that Spirit was bringing through. I burst into light language, gave a message none of us understood, and then started sobbing. Sakina recognized my language as an ancient tribal dialect she had heard one other person speak. 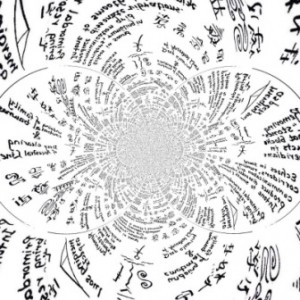 Certain light languages carry frequencies that contain cosmic or galactic messages or codes. I sensed that my message had something to do with the Native Americans who suffered and died along the Trail of Tears in the mid- to late-1830s. I recognized that there were spirits who were ready to cross over. So much for the gift of discerning spirits; I did not know that I had picked up the earthbound spirits of about 250 of these ancestors.

Once I got home, I felt sad and depressed. Plus, I was having terrible mood swings, and knew that I was carrying more than my personal energy. I kept thinking that maybe some lower-vibrating issues were coming up to be cleared as I integrated higher vibrations from the downloads of energy I received while in Sedona.

After about two weeks of emotional agony, I was lying face down on our back deck begging my guides for clarity and help. That is when I began to have a vision and an internal telepathic dialog with a Native American elder. Immediately, within my own mind, I found myself facilitating a ceremony that released these precious Native American souls into the light. It was like watching a movie as I observed what was happening. It had been almost twelve years since I had seen dreams and visions like this. In fact, all the gifts I had been endowed with in the 1990s seemed to be reactivating of their own accord.

A little more than year later, I am activating people in the language of light and ministering to those who need help with soul aspects walking in and soul exchanges.

If you are interested in activating your galactic light language as an expression of your soul’s frequency, you may want to attend the next light language workshop or schedule a session with Yvonne Perry.